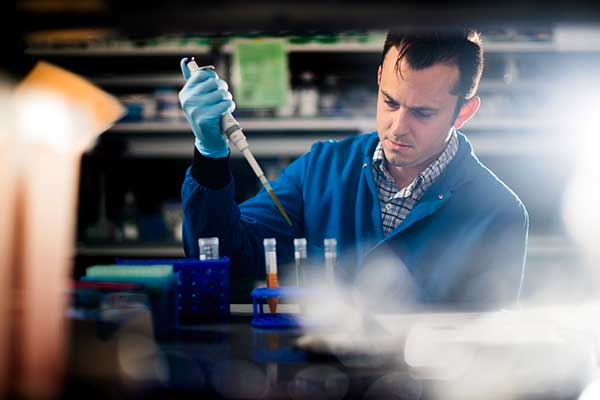 ChE Assistant Professor Ryan Koppes is using the Spark Funds he received earlier this year to develop methods of converting olfactory stem cells into Schwann Cells that can be used to repair nerve damage.

Imagine a catastrophic injury to one of your hands – the crushing weight of furniture or an accidental slip of a dumbbell while working out; a severe burn, or damage from a power saw. Injuries like these cause severe nerve damage that could significantly impact one’s quality of life; from lifelong debilitating pain to decreased mobility. However, thanks to work being done by researchers at Northeastern University, this may no longer be the case.

Ryan Koppes, Assistant Professor in the Chemical Engineering Department at Northeastern, and Katelyn Neuman, 4th-year PhD student and project lead, have been hard at work trying to tackle this problem. Together, they’ve discovered a possible path forward for repairing nerve damage. By using a patient’s olfactory, or nasal, stem cells, they have come up with a potential source of Schwann Cells; Schwann Cells are integral in supporting and repairing nerve cells, but they are normally difficult to source without pulling them from other nerves. With this proposed method, it would be possible to get a large source of new Schwann Cells with a minimally invasive procedure.

When one thinks about stem cells, often the first thing that comes to mind is a cell that can be turned into, or differentiated, into other kinds of cells; the main drawback is the difficulty in getting those stem cells, as either their quantities are low or it is difficult to access them (such as with those deep within bone marrow). However, these technically aren’t the only stem cells available in the body. There are other stem cell sources that are further down the differentiation path, and thus they are limited in what they can turn into.

Olfactory stem cells are one of these types of stem cells, which has caused them to go overlooked. “These olfactory cells are already pretty far down the neural lineage, so they’re not as popular as you’re not likely to make muscles or tendons or other sorts of organs,” Koppes says. Despite this, Koppes and Neuman have determined that one of the cells they can turn into are the aforementioned Schwann Cells.

Additionally, these cells have properties that make them even more ideal. “These cells are constantly supporting nerve regeneration because they’re so close to the outside world, so they have some innate regenerative properties compared to other stem cells – it’s why we think they differentiate so well,” Neuman says. “They are located in close proximity to many neurons, and this is also why we think they are further down the neural lineage.” The procedure to retrieve these cells is much easier when compared to acquiring bone marrow stem cells or taking Schwann cells from other parts of the body; for that reason, the process could provide a much easier route for getting large quantities of Schwann Cells.

Retrieving the olfactory stem cells is only a part of the picture – actually turning them into Schwann Cells is where Koppes and Neuman’s work really comes into play. Once the cells are acquired, they have to be differentiated. “We first added in spent Schwann cell media, which contains proteins and other material produced by Schwann Cells, and were able to differentiate them,” Neuman notes. From there, they were able mimic this differentiation media artificially, adding growth factors to help the culture grow into a usable source for the patient. Neuman adds, “We created a of cocktail of proteins based off of those produced by Schwann cells; we weren’t sure if we were going to get anything from that, but surprisingly we were.”

As of right now, the pair have been working mostly with rats. “We’re working a lot right now with rat cells to optimize the differentiation and characterization, and eventually we want to move towards human cells,” Neuman says. For now, the science and rat models provide considerable optimism for the project moving forward.

For Koppes, the Center for Research Innovation (CRI) has been there the entire way. “They helped not only with pushing our work to the next level, but also contributing intellectually and fleshing out what it’s going to look like,” he notes. Previously, CRI had helped Koppes secure a different patent and set up connections so that he could present at a microfluidics conference in Boston (leading to even more connections for him down the line). “They’ve been incredibly supportive with everything we’ve put forward.”

This project means a lot to both Koppes and Neuman, for varying reasons. Neuman had an interest in nerve regeneration stretching back to her undergraduate studies, and this project allowed her to investigate that and more. “It helped sparked additional interests I had; I was mainly focused on the material side of things, so stem cells were kind of a new topic I wanted to learn more about,” she notes. Koppes found his connection to the project through his wife Abigail Koppes (Associate Professor in Chemical Engineering), who had been working on peripheral nerve repair since her graduate studies. For him, the difficulty of tackling this problem serves as a further drive. “There’s no good solution for peripheral nerve repair – I’ve heard surgeons say they’d rather cut a limb off than try to repair the nerve if they’ve run out of viable tissue.” This project serves as a novel way to take on the problem. “There have been a lot of excellent engineers working on this problem for close to a hundred years. It’s not for a lack of effort or funding, it’s just that difficult – and for me, the challenge keeps it engaging.”