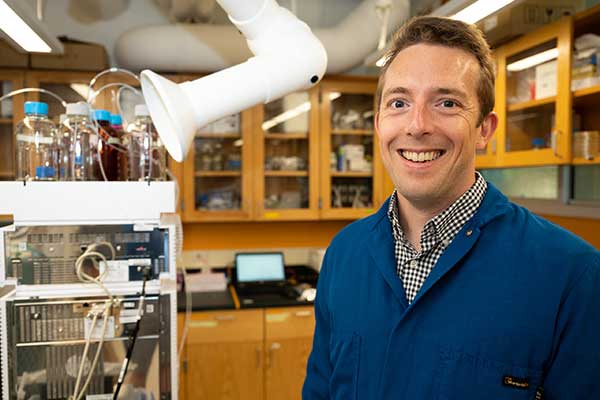 With rising gas prices and the negative effects of oil drilling and greenhouse gases on climate change, the need for efficient, sustainable biofuel production is higher than ever. Historically, interest and investment in biofuel technology have come in waves, with nothing proving to be commercially viable enough to cut it in the mainstream. However, in the last decade, the use of acetogenic bacteria to directly produce biofuels has emerged as a promising method for addressing industrial waste gas streams.

However, there remain two significant technological challenges with using acetogenic bacteria gas fermentation. First, acetogenic bacteria are killed by oxygen, so the waste streams require a costly pre-treatment to remove any trace oxygen. Second, acetogens are energy-limited, so the creation of fuels other than ethanol is not currently commercially viable.

Biofuel Production of the Future: Co-Culture Fermentation in the Woolston Lab

Dr. Ben Woolston’s lab at Northeastern aims to solve both these problems simultaneously by employing a co-culture approach. In their system, gas fermentation and product formation are split between two different microbes that co-exist in a single reactor. The acetogen converts CO, H2, and CO2 to acetate at a high yield. Escherichia coli then converts the acetate into a higher-value product. E. coli also rapidly consumes the oxygen in the reactor to create the low-oxygen conditions necessary for the acetogen to grow.

This symbiotic co-culture could enable the high-yield conversion of carbon-rich waste gases to high-value fuels and chemicals. The use of multiple microbes with specialized metabolic capabilities also offers access to a wider portfolio of products and more stable operation than is possible with a single microbe.

“My initial research was in organic synthesis, but I realized the power of enzymes and cells to perform the same reactions more efficiently and sustainably,” said Woolston. “I was particularly attracted to what I call ‘weird microbes’ that use metabolic pathways that are still being understood. Using these cells to make fuel molecules more sustainably satisfies my desire to use my research to help solve pressing global challenges.”

Overcoming the existing challenges facing biofuel production could enable a dramatic expansion in the product portfolio of gas fermentation, as well as significantly reduce capital and operating costs, aiding widespread adoption of gas fermentation for a sustainable future.

“If all goes well, this technology could be adopted at a large scale for producing biofuels and biochemicals from a range of waste gases, helping to minimize the carbon footprint of chemical manufacturing,” says Woolston. “We also see other potential uses of the co-cultures technology with other pairs of microbes for applications ranging from food production to waste plastic upcycling.”

Commercialization Through the Spark Fund

Dr. Woolston’s lab has already demonstrated the viability of the co-culture. This year, they were awarded funding from the Spark Fund, and will use the funding to further de-risk the process and demonstrate direct conversion by the co-culture of CO2 to a high-value target chemical in a bench-scale bioreactor.

During the pre-commercialization process with the CRI, Dr. Woolston has been encouraged by the consistent level of interest in biofuels. “I have been pleasantly surprised how many investors and students are interested in sustainability,” he said. “Interest in biofuels research has suffered from cyclical interest levels that often correlate inversely with the current price of oil, so it is refreshing to see consistent interest from young students in work that will help mitigate global climate change.”

In the short term, the Spark Fund will support the lab by enabling them to perform the experimental research necessary to interest additional investors and licensees. “The Spark seed funding is geared toward technology development, which is particularly useful because much of the federal funding focuses more on the basic science,” says Woolston.

“The CRI has been terrific to work with. They made the process of protecting this technology straightforward. They also helped in the process of securing the very first external funding we had for this project through the MassVentures ACORN Innovation program.”