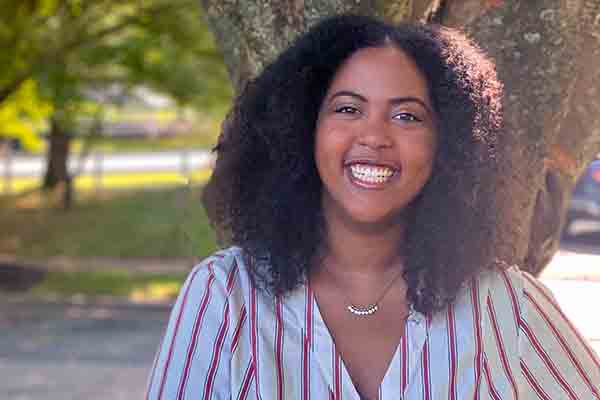 During each step of her college journey, Northeastern graduate Liah Dukaye, E’17, chemical engineering, encountered, in her words, “ups and downs”—experiences that ultimately helped her build her skills, resilience, and confidence. A network of mentors and supporters who pushed her to challenge herself strengthened her belief that she could do whatever she set her mind to do.

An early interest in chemistry and math, along with an intellectual curiosity in the way the world works and how she could contribute, drew Dukaye to the study of chemical engineering.

“The co-op program was the biggest reason I chose Northeastern,” says Dukaye. “I felt it was a great way to enter the workforce and get hands-on experience. Coming from high school, you don’t always know what you want, but the co-op program helps you figure out what you want to do.”

Each of Dukaye’s three co-ops provided unique learning experiences. Her first co-op at a release coating company “helped me learn what I don’t want to do,” she says. Dukaye’s second co-op at a theoretical physics lab at Northeastern provided an opportunity to build a critical skill set—learning the mechanics of doing research and presenting her work to peers.

Developing as a leader

Perhaps the most invaluable source of support for Dukaye came through joining Northeastern’s Black Engineering Student Society (BESS) as a freshman where she found a collegial network and participated in weekly study sessions. Then-BESS President and senior Samantha Kendrick became a key advocate for Dukaye and encouraged her to join the organization’s board. “She was very good at signaling that she believed in you,” says Dukaye. “I became the finance chairperson and then treasurer. It was a great lesson on using leadership skills to get things done. I learned how failures don’t hold you back. It really sunk in for me that if you fail at something, you try again.”

That lesson in learning from failure also served Dukaye well at another point during her undergraduate years. She joined a Northeastern team in an ocean science symposium project competition at the urging of Richard Harris, assistant dean, Academic Scholarship, Mentoring and Outreach & director of Northeastern University Program in Multicultural Engineering, Diversity Programs. While her team did not do well the first year, Dukaye enjoyed the challenge and returned the second year. “I was more hands on, more organized, with four team members who were younger than me and leadership experience under my belt,” she says. “We won first prize in the challenge. It was a nice signal that we could fix things that are wrong.”

There were other experiences along the way that Dukaye credits with helping her build important skills and learn valuable lessons. While doing research in the nanomaterials lab, she met then-PhD student Chris Cogswell, a mentor who encouraged her to participate in an American Institute of Chemical Engineers (AIChE) conference for students and present her work, something she had never considered. “I did and I placed third in my group,” she says. “It was another reaffirming experience for me.”

A scholarship application that did not pan out also taught her about the value of asking for and learning from feedback, courtesy of former Undergraduate Program Chair Dr. Katherine Ziemer who had written Dukaye a recommendation letter. “When I did not get the scholarship, she advised me to ask them what I could do better, where the holes were in my application, and I did that,” she says. “I learned not to underestimate myself. Having other people tell me ‘You can do this’ was present throughout my whole undergraduate experience.”

With a desire to continue learning as much as possible through hands-on work experience, Dukaye launched a successful professional career at Access Vascular Inc.—a medical devices manufacturer in Bedford, Massachusetts—where she worked as a research and development engineer until June 2020. Recently awarded the prestigious American Association of University Women (AAUW) Selected Professions fellowship—designed for women engaged in full-time study in a master’s or professional degree program in which women are underrepresented—Dukaye is currently enrolled at the University of Pennsylvania, where she is pursuing a master’s degree in materials science and engineering.

So, what does the future hold? “I do imagine myself still in a health-related industry,” says Dukaye. “I don’t know if that will be in an engineering or an engineering leadership position. I may seek out an internship at a pharmaceutical company, which fits with my skill set, then I might pivot after graduation. If not, I’ll stick with medical devices. Whatever happens, I know I’ll have the tools to reach my goals.”