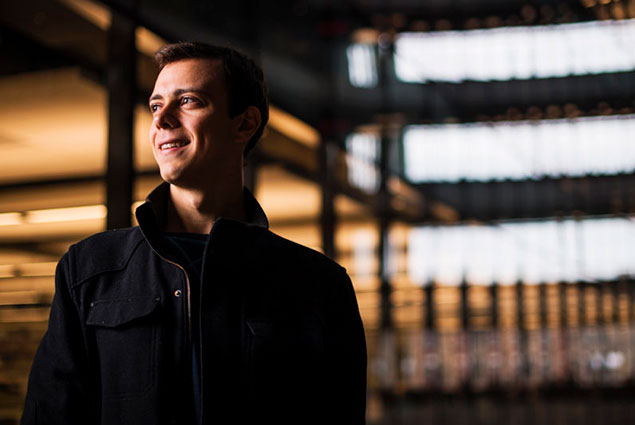 Taylor Wilde, BS Chemical Engineering 2019, was the recipient of a Fung Scholarship, which allowed him to work on co-op at a research lab at École Normale Supérieure, a university in Paris.

Chemical engineering major Taylor Wilde, E’19, came to Northeastern, in part, for the university’s renowned co-op program, looking to gain real-world work experience in materials science. So far, he’s capitalized on his experiential learning opportunities, working first at a Massachusetts-based water purification company and most recently wrapping up a global co-op in Paris.

From January through June, Wilde worked in a research lab at École Normale Supérieure, a university in Paris. Wilde collaborated with a postdoctoral researcher to create nanomaterials using a chemical vapor deposition, or CVD, furnace. CVD is a chemical process widely used in manufacturing and is fundamental to the production of electronics and many other applications. Wilde used the CVD furnace to make nanofilms, and then he and the postdoc analyzed the materials’ electrical properties.

Wilde, E’19, said his global co-op wouldn’t have been possible without receiving a Fung Scholarship, which provided the financial support necessary to live and do research abroad.

“One of the reasons I wanted to work overseas was to explore a new country and gain experiences in a different cultural environment,” Wilde said. “I would definitely consider working abroad in the future. This experience opened my eyes to that opportunity.”

A gift from the Victor and William Fung Foundation Limited in 2013 created the endowment fund to provide scholarships to students participating in Northeastern’s global co-op program. The scholarship fund was established as part of Northeastern’s Empower fundraising campaign. Spencer Fung, PA’96, whose family established the foundation, is a champion of the university’s co-op program and credits his own global co-op experience as a student at Northeastern for influencing his career direction.

Wilde’s experience on co-op in Paris—particularly, his work with the CVD furnace—also helped him land his third co-op next year at GVD Corporation in Cambridge, Massachusetts, where he’ll work again with a CVD furnace. The company develops polymer coatings for use across various industries, notably in rubber manufacturing.

Longer term, Wilde wants to work in renewable energy and contribute to the efforts across the globe to lower society’s carbon footprint while also providing enough energy to satisfy the needs of the world’s growing population. Changing to more renewable energy sources, he said, is a critical global challenge of our time.

“After graduation, I hope to be able to make a positive change in the world by focusing my work on something important,” he said. “I also think the work in renewable energies, like solar power, will help improve the quality of life for people in underdeveloped nations by giving them easier access to electricity.”