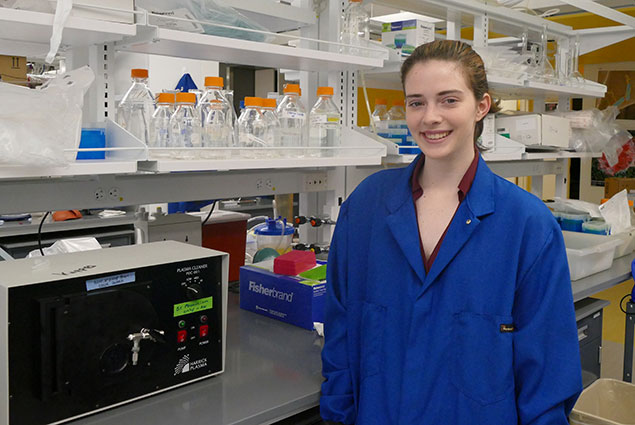 Ghio, who received her award to investigate “Iron homeostasis in Caco-2 cells” says, “I knew about the award since I started school at Northeastern, however, I didn’t have any research experience, so I filed it in the back of my mind.”

As a first year student, Ghio volunteered in Dr. Abigail Koppes’ Advanced Biomaterials for Neuroengineering Laboratory (ABNEL) and worked with PhD student Marissa Puzan on her research studying the connection between the small intestine (or gut) and the brain and the development of neurogastrointestinal conditions. Ghio credits Puzan and Koppes for nurturing her interest in their projects even while Ghio was still learning basic cell culture technique. “Marissa and Dr. Koppes didn’t stop with just teaching me technical skills, they included me in lab meetings, shared articles with me, and helped me begin to develop understanding of the small intestine and its relationship to conditions such as irritable bowel syndrome, depression, and autism and this gave me the confidence to pursue a project of my own.”

As Ghio learned more about the goal of the lab to build an in vitro tissue engineered model of the small intestine, her excitement grew and she started trying to develop an original idea that would contribute in some way to understanding the small intestine. Part of Ghio’s inspiration for her UGRCE submission came from her father, a physician scientist. Ghio explained, “My dad is a pulmonologist and studies iron in the lung in relation to lung disease. Discussions at the intersection of these two fields of study yielded the idea of studying iron in the intestine.”

As Ghio learned more from her dad and through research articles about the importance of iron to the human body, and also about how poor iron absorption is in the small intestine, her idea for the award submission began to take shape. Ghio’s submission was further defined by the application process, that required in-depth thought and planning. To receive the award, candidates created a proposal which included objectives of the project, background, methodology, relationship of the study to the lab’s goals, and a budget for supplies. Ghio said the application process forced her to think critically about every step of the project. Ghio won the award and received a grant of just under $3000.

In Ghio’s research, she is studying the impact of metabolites on iron absorption in Caco-2 cells (a line of cells developed from colon cancer cells) that model the regulation and absorption of nutrients in the intestine. By undertaking this research, Ghio hopes to learn more about iron absorption in the gut, specifically ways to enhance that absorption. Ghio hopes data will prove useful to the ABNEL goal of making an in vitro model of the small intestine, and she also believes that research in this area will help shed light on conditions such as anemia and lactic acidosis; improved understanding will hopefully allow doctors and other researchers to better treat and diagnose these illnesses.