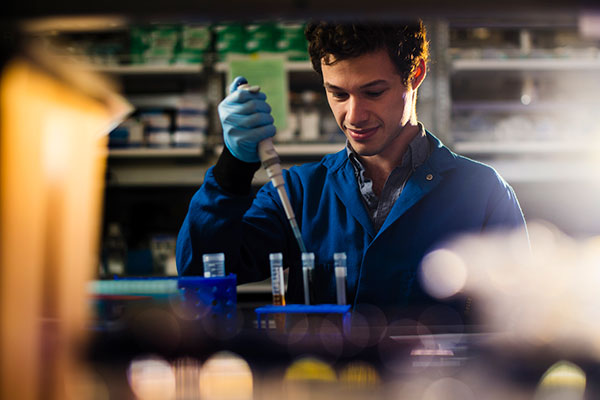 After receiving his bachelor’s degree in chemical engineering from Rensselaer Polytechnic Institute in 2015, Jonathan Soucy joined Northeastern University pursuing a PhD in chemical engineering. His research has focused on neurochemistry, specifically on the sympathetic and parasympathetic nerve systems—the mechanisms by which the brain controls the speed and function of the heart directly and indirectly via the adrenal gland, the “fight or flight” response. Using in vitro models of an organ-on-a-chip platform to mimic neural systems, Soucy has studied the nervous system’s responses to a wide variety of stimuli, ranging from drug compounds to electric shocks. His research has led to some breakthroughs as well—a biomaterial he developed to encourage regrowth of heart cells was found to work far better with neurons, as well as having strong adhesive properties, effectively acting as nerve superglue in lieu of sutures for repairing nerves and more. His publication on this is one of the most highly cited manuscripts in Tissue Engineering A. Overall, Soucy has published seven manuscripts, three as first author, with several more in submission. He also contributed to two filed patents, received Northeastern’s Outstanding Graduate Research Award, and an American Heart Association Predoctoral Fellowship. Upon graduation, Soucy joined Harvard Medical School as a postdoctoral fellow, and his career ambition is to become a professor.