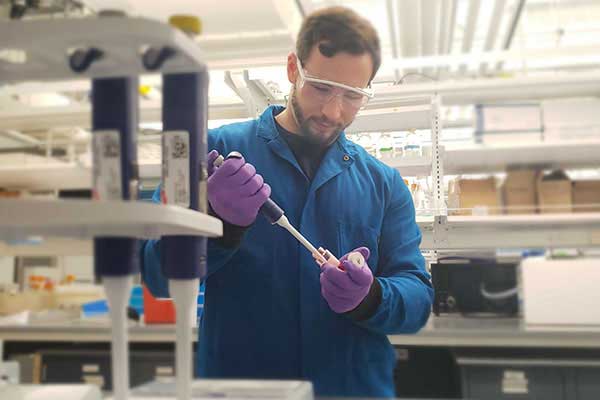 Cell culture research—defined as the process by which cells are grown in conditions like those in the body—is one of the most useful tools at scientists’ disposal. In several research areas, it is desirable to grow cells in low oxygen conditions or hypoxia. However, the cost of hypoxic cell culture is far too high, discouraging scientists from implementing this valuable research technique to potentially gain more understanding of diseases such as cancer. To address this problem, Zach Rogers, a chemical engineering PhD student in Assistant Professor Sidi A. Bencherif’s lab, developed a novel proposal and was selected to join the Northeastern node of the National Science Foundation’s I-Corps program for his work.

Working on a solution to make hypoxic cell culture research more affordable, Rogers and his team in the Bencherif Lab have developed hypoxia-inducing cryogels (HICs), polymer-based tablets that can be added directly to cell cultures to create hypoxia. “We have developed a tablet that scientists can add directly to their cell culture plate,” Rogers says. “We have attached unique oxygen-depleting biomolecules to a biomaterial scaffold. As oxygen enters the liquid that cells are cultured in from the surrounding air, these biomolecules deplete that oxygen rapidly. The result is a hypoxic environment within minutes that is maintained over the span of a cell culture experiment.”

Originally from California, Rogers has become enamored with the city of Boston since moving here to study at Northeastern—and he says he plans to stay and use the knowledge he’s gained through the university to make a difference in the pharmaceutical industry. And now that he’s part of I-Corps, he’ll have a significant advantage forging down this path. His induction into the program shows a level of confidence in his proposal and his future as a chemical engineer on the part of the NSF, which operates I-Corps out of various “nodes” across the country that support regional educational institutions, including Northeastern. According to the NSF website, the program “prepares scientists and engineers to extend their focus beyond the university laboratory and accelerates the economic and societal benefits of NSF-funded, basic research projects that are ready to move toward commercialization.”

As a member of the program, Rogers has earned access to the mentorship of engineers and entrepreneurs from a wide variety of industries. “It’s like a less aggressive Shark Tank,” he says of the support from the I-Corps mentors. “They’re very supportive, but if they’re interested, they’re willing to push you to see what you can or can’t do.”