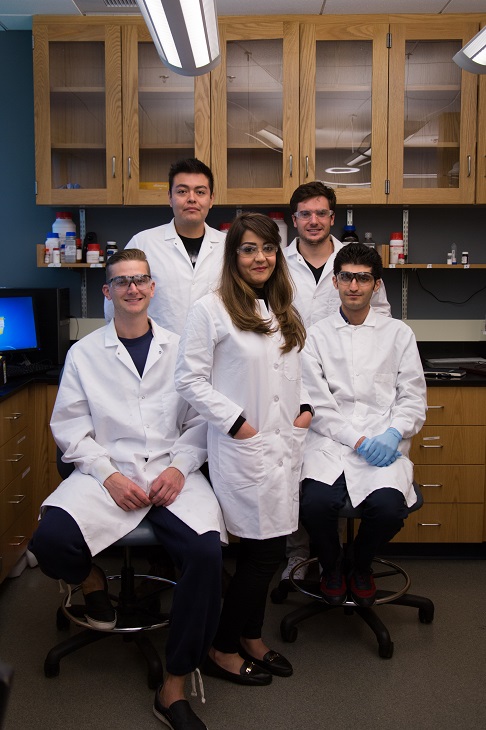 A research team at Northeastern has played a leading role in the development of MeTro, a new surgical glue that could significantly improve how surgeons approach organ and tissue repair.

Nasim Annabi, an assistant professor of chemical engineering at NU, leads the lab that has been working on the new material, collaborating with researchers at Harvard Medical School and the University of Sydney. The material is intended to be used in place of sutures to seal incisions on organs including the heart and lungs, Annabi said.

“It could definitely reduce surgery time and eliminate complications for the patients after surgery,” said Annabi, who is also a lecturer at Harvard. “If they use sutures, there is a risk of infection and sometimes a second surgery is needed to remove the sutures.”

A paper detailing the MeTro project, published Oct. 4 in Science Translational Medicine, said using sutures or other foreign materials to close seal incisions is not optimal, despite being a long-standing practice out of necessity. Using sutures, which pierce surrounding tissue, can further damage the wound area and increase the risk of infection, according to the paper. This led Annabi and her team to create MeTro.

“Annabi et al. capitalized on the elastic properties of the human protein tropoelastin to engineer a photocrosslinkable hydrogel sealant material,” the paper read. “We engineered a biocompatible and highly elastic sealant with tunable adhesion properties.”

Shortly after Annabi created the material, members of the medical field were intrigued by its potential to be used in surgeries.

“I synthesized MeTro for the first time in 2013 and published a paper on it,” she said. “I presented the technology at Beth Israel Hospital by invitation, and a group of surgeons asked me why we don’t use this as a surgical material.”

For lung surgeries, Annabi said, there were no technologies used for sealing lung incisions aside from sutures or combinations of sutures and glue, which still resulted in air and fluid leakage.

“From there, we started this project to improve the material so we can use it as a suture material, meaning they would no longer need to use sutures in lung surgery,” she said.

Ehsan Shirzaei Sani, a third-year chemical engineering Ph.D. student at Northeastern, said he is excited for the chance to work in Annabi’s lab on the MeTro project.

“I like working on this project because the material is going to be used,” Sani said. “It has the potential to be useful in real medical application. I partly joined the project for that.”

Sani said he feels the lab has great potential, and has grown significantly since he began working there. He joined in 2016 as its first Ph.D. student, and today there are seven Ph.D. students as well as numerous visiting scholars and undergraduate students.

Creating a material with such great potential for medical advancement has not come without obstacles. Early on, Annabi struggled to get funding for the project — though they recently received a $2 million grant to continue work. One of the first technical problems they faced was making the material biodegradable so it wouldn’t require removal from a patient’s body, Sani said.

Another issue came in the animal testing phase, which began with testing on rats.

“Rats weren’t a suitable model because human lungs experience higher pressure than rats, so that couldn’t convince us that it would work for humans in the future,” Annabi said. “We needed to use large animals, which cost more money and are harder to keep and care for.”

They eventually found success using the material on pig lungs. Their work on animals is not finished, Annabi said, as they need to assess how the material works on the animals after longer periods of six months and one year.

Eventually, Annabi sees the material being implemented for a wide range of surgical uses, in addition to the lung use currently being studied.

“There are many places in the body that are not easy to access for suturing,” she said. “Imagine if we can inject this glue on these areas and cross-link it. The surgeon can easily inject the glue on the wound and shine a light on it for as little as one minute to achieve closure.”

Talya Mayman, a second-year nursing major, thinks the advancement is a rational and useful step toward safer surgery.

“It makes sense,” Mayman said. “The more times you open up a patient, to remove sutures or put in tubes or anything like that, the more at risk they are for infections. It makes sense to reduce the number of patients who need additional surgeries post-op.”

Sani said though this material is currently intended for use on internal surgeries, including to the lungs, heart and arteries, they are researching similar materials that could be used for other applications, like external wound healing and corneal repair.

The team’s surgeon collaborators at Beth Israel are happy to support human trials when the time comes, Annabi said.

“Hopefully that day will come in the next few years,” she said.