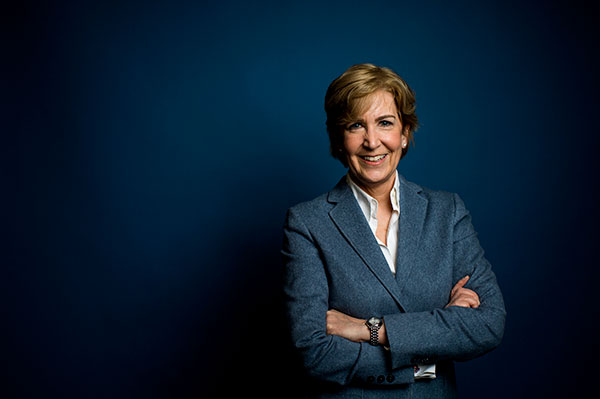 ChE/MIE Professor Laura Lewis has been appointed the rank of University Distinguished Professor, the highest honor the university can bestow upon a faculty member.

Northeastern has appointed Laura Lewis and Daniel Medwed to the rank of University Distinguished Professor, the highest honor the university can bestow upon a faculty member.

Those named University Distinguished Professors have earned international recognition and distinction for transformative educational and scholarly contributions. Lewis is a leading expert on magnetic materials, while Medwed is a renowned scholar in criminal law and wrongful convictions. Lewis and Medwed will be recognized at the Academic Honors Convocation on April 23.

Lewis has spent the better part of 30 years researching magnetic materials, which are ubiquitous in society and provide functionality to advanced devices, sensors, and motors of all kinds. Through her research, she has developed novel approaches to creating new materials for magnetic cooling, data storage, and super-strong magnets, among other applications, and she is an expert in critical materials that are subject to supply risks and have no easy substitutes.

In her career, Lewis has led pioneering research elucidating connections between atoms, crystals, and magnetism to advance a variety of technologies. These applications include magnetic recording media, biomedical diagnostics, environmentally sustainable cooling technologies, motors, generators, and energy harvesting from mechanical sources such as wind and ocean. She has built a strong record of scientific achievement and leadership while supporting outreach, diversity, and literacy in science and technology.

Lewis joined the Northeastern faculty in 2007 as chair of the Department of Chemical Engineering. She is a fellow of the American Physical Society; has published more than 200 papers; and has served on many national and international advisory boards. She has won prestigious awards for her research, including a Fulbright Senior Scholarship in 2017 and the Northeastern University Excellence in Research and Creative Activity Award in 2014.

Her Fulbright work will begin in May in Spain, where she will conduct research at the Instituto de Ciencia de Materiales de Madrid as part of a project to tailor magnetic microwires for advanced applications. Lewis will perform research there in the summers of 2018 and 2019.

Medwed’s work in examining wrongful convictions focuses specifically on why innocent people are convicted and often serve lengthy sentences. His research suggests that poor prosecutorial decisions and burdensome state post-conviction procedures are major factors in these cases. His 2012 book Prosecution Complex: America’s Race to Convict and Its Impact on the Innocent explores how well-meaning prosecutors may contribute to wrongful convictions because of cognitive biases and an overly-deferential regime of legal and ethical rules, while his 2017 edited collection Wrongful Convictions and the DNA Revolution: Twenty-Five Years of Freeing the Innocent discusses the lessons learned from a quarter century of DNA exonerations.

In addition to his continued long-term research on wrongful convictions, Medwed is working on an article for a symposium on prosecutorial ethics; has joined a project to co-author the next edition of a leading criminal procedure casebook; and is part of an interdisciplinary team funded by a new seed grant from the Global Resilience Institute to work with colleagues in the School of Criminology and Criminal Justice and the Bouvé College of Health Sciences to establish a new Center on Crime and Community Resilience.