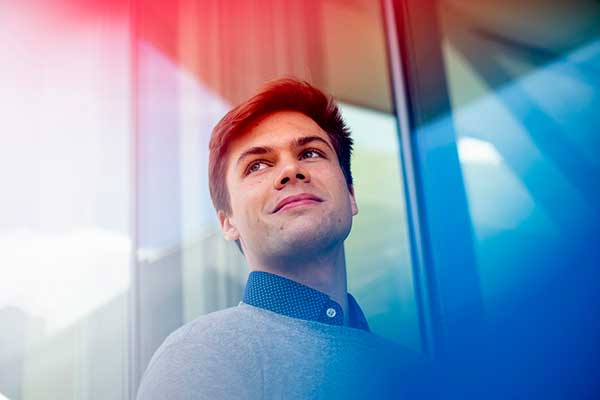 Cameron Young, E’22, chemical engineering and biochemistry, is the first Northeastern student to be selected for the prestigious Churchill Scholarship, which will allow him to study breast cancer at Cambridge University in England. Young was also selected for the 2022 Senior Excellence Award in Research and Creative Endeavors from the Northeastern University Honors Program.

Main photo: Cameron Young, who will graduate from Northeastern in May, recently earned the Churchill Scholarship, an award granted to outstanding American students to attend Cambridge University in England.. Photo by Ruby Wallau/Northeastern University

For a 23-year-old, Cameron Young has an impressive resume in the field of biomedical research.

As a researcher at Boston Children’s Hospital and a coauthor of 10 medical-related papers, Young’s accomplishments throughout his undergraduate experience at Northeastern have recently earned him the Churchill Scholarship, an award granted to outstanding American students to attend Cambridge University in England.

Young, who will graduate from Northeastern in May with a degree in chemical engineering and biochemistry, will begin a one-year master’s degree in medical science at the British university this fall.

Through the program, Young will work with Cancer Research UK, the world’s largest independent cancer-research charity. More specifically, Young will analyze the genetics of a large pool of breast-cancer patients in order to study and catalog different ways that the disease manifests.

“The big question we’re trying to answer is: Based on the specific characteristics of different types of breast cancer, how can we use the unique traits of the individual to better treat the cancer and predict how patients are going to respond to something?” he says.

Young has years of experience working with large datasets through his co-ops at Mass General Brigham and Boston Children’s Hospital. “But sometimes I didn’t have the skills to do the more complex statistical analysis because I just haven’t learned that yet,” says Young.

“My time at Cambridge will be a great opportunity for me to gain those skills, which will hopefully translate to my future career in medical research,” he says.

Young, who is the first Northeastern student to receive this scholarship, plans to attend medical school after finishing his year at Cambridge.

Although he could tack on an extra year at medical school to learn more complex statistical analysis, he would rather acquire these skills during his master’s degree before attending medical school so as not to interrupt his four-year stint of medical courses.

Plus, the master’s degree from Cambridge will have all expenses paid, thanks to the scholarship.

Though he’s not entirely certain yet what field of medicine he wants to work in, Young thinks he would like to study cancer in children.

“I love working with kids,” he says. “It’s so rewarding watching kids recover, and from a medical perspective, kids are more interesting. They’re more resilient than adults, and the ways that diseases present themselves are more complex in children.”

The device, which helps to focus the radiation only on cancer cells, is currently undergoing clinical trials.

For Young, who grew up in Massachusetts and has left the United States only once, the prospect of studying abroad in conjunction with a prestigious British organization—Cancer Research UK—is exciting.

“Cancer is fascinating because it’s such a diverse field,” he says. “It’s hard to treat and understand, and I’m looking forward to tackling more of these challenges in oncology next year.”