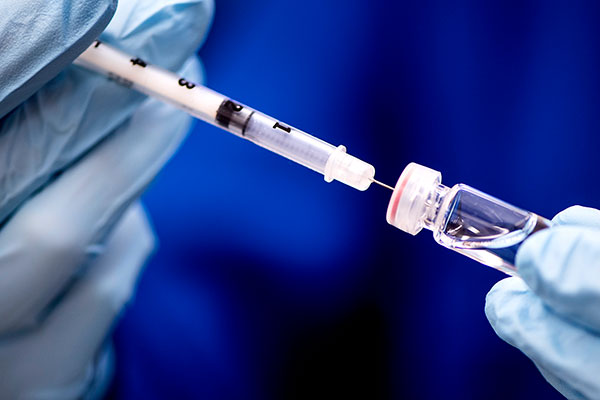 Bouve/ChE University Distinguished Professor Mansoor Amiji explains why it takes so long to create a safe and effective vaccine for COVID-19.

In last week’s presidential debate, President Donald Trump claimed that the United States is only weeks away from a COVID-19 vaccine—a timeline at odds with some of the top scientists in his administration, who have suggested a vaccine won’t be available for months.

Most experts on the intricacies of the drug development process agree that the Food and Drug Administration probably won’t approve a vaccine until the end 2020 or early 2021, says Mansoor Amiji, University Distinguished Professor of pharmaceutical sciences and chemical engineering at Northeastern. Several pharmaceutical companies began testing COVID-19 vaccines as early as March and have been working through clinical trials to ensure their vaccines are effective and don’t cause dangerous side effects. Some of the most promising vaccine candidates have now entered the last phase of these trials.

That’s breakneck speed for a process that usually takes three to five years of rigorous testing for safety and effectiveness, says Amiji, who explained why vaccines take so long to develop and distribute.

“I disagree with the President on this point that there is any way that we can expedite the process [any further],” Amiji says. “There is no magic wand here, we have to go through these studies.”

How would a COVID-19 vaccine work?

A vaccine trains people’s immune systems to recognize and fight off an infection. Vaccines for COVID-19 use a compound based on the spike proteins that adorn SARS-CoV-2 like the Sun’s corona. Those proteins help the virus bind to human cells.

“That part of the viral molecule is enough to cause an immune response, but certainly it doesn’t have any infective potential, so it will not harm the patient,” Amiji says. “Ultimately, the spike protein is what is going to cause the immune cells to produce antibodies and to protect the host from the infection.”

Why do clinical trials take so long to complete?

The clinical trial process is divided into three phases before a vaccine is approved by the FDA. A fourth, post-approval phase monitors the safety and efficacy of the vaccine after it reaches the market.

The first step is the preclinical phase. This happens in the lab and doesn’t involve human test subjects. Its purpose is to demonstrate that a compound could be a good candidate for a vaccine.

During the preclinical phase, scientists have to compile enough data to show that the compound can generate a response from the immune system, while also providing evidence that the potential benefits of the vaccine are much higher than the risks associated with using it, Amiji says.

Scientists then develop the candidate compound into a vaccine product. In this case, the spike protein—or some other genetic material from the coronavirus that helps produce the protein—serves as the active ingredient. The vaccine product also contains a mix of other components to help it navigate the human body.

A Phase 1 clinical trial can now begin. During this period, a small number of people receive different doses of the vaccine product. The idea is to assess whether small increments of these doses pose a risk for the human body.

“From the preclinical studies, you’ve identified a range of doses, and now you’re actually testing it in humans to confirm that those doses are going to be safe,” Amiji says.

Because the purpose of Phase 1 is to assess safety rather than the efficacy of the vaccine, the study usually involves a small cohort of participants. That means this phase of the trial isn’t designed to study a broad demographic.

“You narrow your choices of individuals who enroll in Phase 1 trials in a much more confined way,” Amiji says. “The purpose is not to try to see if this product works or not—it’s just to see if it’s safe.”

If it is deemed safe, the product can move to Phase 2. This step increases the number of people involved in order to better assess how the body responds to the vaccine candidate. At this point, scientists begin to split people into different testing groups, including people who could be potentially infected.

“Now you’re starting to ask the bigger question: Is it effective, can this vaccine work?” Amiji says. “But at the same time, this doesn’t really capture the overall demographic, especially in a heterogeneous country like the United States, where we have fairly diverse groups of people, different age groups, different races.”

Scientists conduct these clinical trials incrementally as a way to avoid exposing a large number of people to rare, but adverse, reactions to the vaccine that would be difficult to spot in small groups of people.

“You may not have captured any of that in animal models that you tested, if it only starts to show up in human studies because its toxicity is very specific to the human body,” Amiji says.

Phase 3 is designed to catch such specific toxicities.

This phase recruits thousands of people who are split into different groups. Scientists administer the vaccine and placebos—fake vaccines that have no physiological effect on the body—then observe who resists infection, proving whether the vaccine is effective or not.

Phase 3 takes place over a longer period than the earlier stages, as it’s also used to explore one of the most important questions about a new vaccine: How often does a patient need a dose, or how long does it provide protection? And, because this phase studies large and diverse groups of people, scientists can also spot even rarer side effects that might have not arisen earlier.

Currently, companies such as Moderna, Johnson & Johnson, and Pfizer are conducting large-scale efficacy tests of a COVID-19 vaccine at this stage.

If there’s a global emergency, why can’t we do all of this faster?

“It takes a long time because you have to go to multiple clinical centers, and do it not just in the U.S., but you may have to do it abroad as well,” Amiji says. “You see politicians here in the U.S. pushing and trying to get approvals a lot faster, but that’s the nature of these studies. Otherwise, you’re going to get a product at the end that will still have questions remaining.”

One key question with a vaccine for COVID-19, he says, is how to generate a memory response in the immune system. This allows the body’s cells to remember the particular threat of the coronavirus, inducing long-term protection.

“Is it something that would require monthly dosing, six-month dosing, or yearly dosing?” Amiji says. “We have some vaccines like the flu vaccine that we need every year, but then we have vaccines, for example, for rubella and smallpox, that give you lifetime immunity.”

Also, scientists need time to recruit people for the studies, and the clinical trials must be long enough for researchers to assess the body’s long-term immune response.

“Is there anything in that vaccine that could cause harm or that would be more dangerous because of the long term?” Amiji says.

Once a vaccine is produced, how soon could we get it?

Even if the clinical trials yield good results, biopharmaceutical companies will still need to manufacture millions of doses to be administered to everyone worldwide, Amiji says. The manufacturing costs are huge, and it’s risky for companies to begin producing a vaccine before ensuring its safety and efficacy for everyone.

“Timeline-wise, that’s another bottleneck,” Amiji says. “You wait for Phase 3 data before you even start thinking about manufacturing large numbers of doses.”

Would a sped-up vaccine process encourage scientists to cut corners?

While we should be optimistic that the U.S. will have a COVID-19 vaccine in the coming months, Amiji says people should also be aware that the clinical trial process takes a long time. “I’m certainly very, very hopeful that we will have a product, but obviously not anything within the timeline that the President is speaking about.”

Still, he says, the entire scientific community—whether at universities, pharmaceutical companies, or government labs—is working toward the same goal and relying on data to make decisions.

“As scientists, the most important part of our analysis is that you base your decisions and all of your opinions on evidence,” Amiji says. “Ultimately, the evidence has to speak, but we need that evidence before we can make any promises to the American people.”