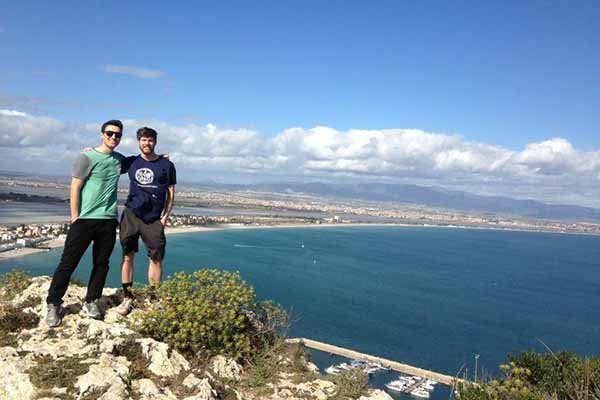 About Me (James Kilgannon)

James Kilgannon is a third year student at Northeastern University pursuing a degree in Chemical Engineering with a minor in Entrepreneurship. He is an active member of the Chem-E-Car club that works on building a car power by chemical reactions. Pursuing an idea originating in Chem-E-Car, he is part of a spinoff project working with microbial fuel cells that has received a provost grant to help with furthering the research. His first coop was at Nano-C, a small company outside Boston that researches carbon nanotubes, helping to refine the purification process. Outside of school he stays busy by hiking, snowboarding, and traveling.

About Me (David Measley)

David Measley is a New Jersey native completing his third year at Northeastern University studying Chemical Engineering. He is a student in the Honors Program involved with organizations such as Delta Tau Delta Fraternity and Habitat for Humanity.  David is currently engaging in his second abroad experience after participating in a summer dialogue to Tarragona, Spain. He spent his first co-op with Genzyme, aiding the Facilities Department of a biologics manufacturing site. His interests include traveling, golf, and baseball.

We are just about halfway done with our global co-op experience at the University of Cagliari on the gorgeous island of Sardinia, Italy. We have learned a lot over the last few months through our work, travel, and interactions with others around us. To start, the research with which we are involved at the university is both interesting and progressive. We have the opportunity to experience two different laboratory settings with varying ongoing projects in each. Every morning we study the formation and behavior of ceramic materials for space applications. The goal is to develop a procedure and combination of materials that yields the most ideal characteristics for withstanding heat, oxidation, and other elements of wear and tear. Using a process called Self-Propagating High-Temperature Synthesis, we initiate a reaction between elements to produce a crystalline compound that can then be ground into powders. In order to create solid ceramic samples from these powders, we work with instruments called Spark Plasma Sintering machines, which can reach temperatures of up to 2000 ˚C. Different samples are then analyzed using Electron Microscopy and other characterization techniques. 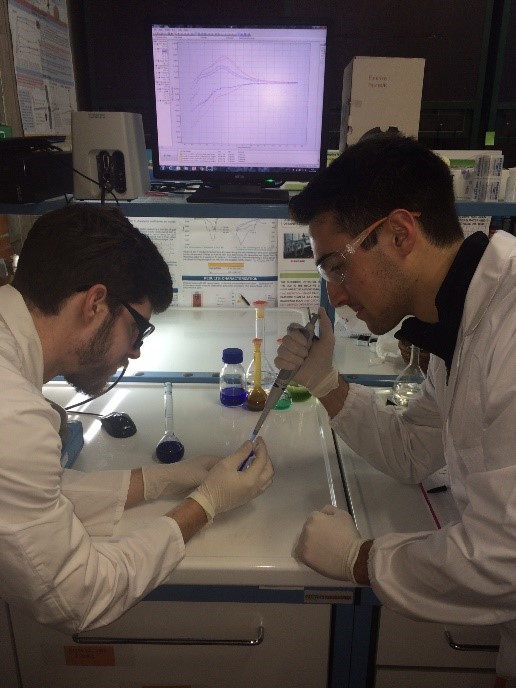 In the afternoon, we work in a different lab that focuses on the synthesis and modification of titania nanotubular structures. The goal of this work is to develop an optimal nanotubular structure that will operate as the photosensitive material in a photoelectrochemical cell. To characterize the nanotubes we perform linear sweep voltammetry and cyclic voltammetry which helps shine some light on the sensitivity of the tubes as they go into testing. Furthermore, we test different copper based materials as cathodes for carbon dioxide electro-reduction. To achieve this we test several compositions of tubes and dopants in many different solutions to determine the best configuration of material.

Outside of work, we have noticed several differences between life in Cagliari and Boston. First off is the obvious language barrier; initially it was a little intimidating, having only a remedial understanding of Italian when we arrived. Through the months, that barrier has become smaller as we have picked up more and more of the language through conversation and a course offered to all international students through the university. We have noticed that people are generally more open and willing to start a conversation with a stranger. People here spend more time relaxing and will sit and drink a coffee with friends often despite how many things they may have to do. People are rarely in a rush and stores often close at peak times when they are most needed. There is a friendly atmosphere between businesses rather than the competitive attitude that we are used to. The whole mindset around food is very different. Ingredients are less processed and there is more pride taken in the preparation and consumption of meals. Dinner is often a three-hour ordeal and there is a strict, specific order that the dishes follow. Pizza and pasta are staples of our diet here. It’s tough to avoid them, but they’re so good that you wouldn’t want to anyway. Since we’re on an island, beaches are easy to come by as well. We’ve already explored different corners of the island to find the clearest water and whitest sands that Sardinia has to offer. We can’t complain about trading a winter in Boston for the sunny weather by the beach.

Upon arrival to Cagliari, we were placed in a student exchange program developed throughout the European Union known as Erasmus. The students participating have the opportunity to study at a university in another country for several months to learn about the diverse cultures, languages, and ways of life throughout different areas of Europe. We have befriended people from Italy, Poland, Spain, Germany, Malta, and many more. These diverse backgrounds mix to give students an understanding of not only the country in which they’re studying, but also the home countries of those around them. We had not heard of this concept before arriving to Italy. Back in the US, studying abroad existed but it was not nearly as common of an experience as in Erasmus. We had spoken to friends who have studied abroad in the past and what they described was an experience very different from the one we have seen with Erasmus. Both study abroad programs are in different countries but in the study abroad programs that we are familiar with, the students generally only interact with other Americans and aren’t exposed to the different languages and cultures as much as with Erasmus. This organization we were placed in gives us an entirely different understanding of the world around us. It was eye opening to see how little we knew about issues, news, and other things going on in Europe. We also discovered how different the politics and cultures of European countries are, despite being located so closely together. Traveling around Europe is easy and relatively cheap, so we are taking advantage of this and getting to as many places as we can. We have traveled throughout Italy including Rome, Venice, Pisa, and Florence and have trips planned throughout the rest of Europe to Paris, Berlin, Amsterdam, and London.