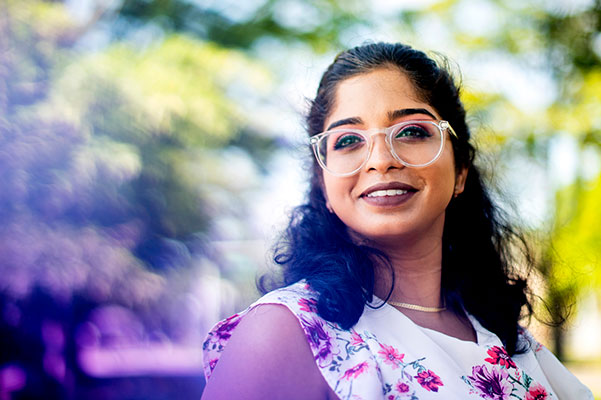 ChE PhD student Vyshnavi Karra just published a book entitled “Necessary Symbiosis: What Happens When Science and Government Work Together (and When They Don’t)” that examines the intersection of science and government and how that relationship has evolved over the years.

She wants to restore the public’s confidence in science

Main photo: Vyshnavi Karra is a doctoral student in chemical engineering who has just published a book that examines the intersection of science and government and how that relationship has evolved over the years. Photo by Ruby Wallau/Northeastern University

To understand how the anti-vaccination movement germinated, one need look no further than a 1998 paper in the esteemed medical journal The Lancet. In it, Andrew Wakefield, then a medical doctor in the United Kingdom, falsely linked the vaccine for measles, mumps, and rubella to autism.

The article was eventually debunked and retracted, and Wakefield—found to have acted unethically in conducting the research—lost his license to practice medicine. Still, the consequences of his claim reverberated—setting immunization rates back by nearly 20 years in the U.K., and resulting in more than 12,000 cases of measles, hundreds of hospitalizations, and at least three deaths.

A cursory search on social media will show that the claim linking vaccines to autism still persists. Vyshnavi Karra, a graduate student of the chemical engineering doctoral program at Northeastern, contends that the Wakefield incident should be a cautionary tale for scientists to be mindful of the authority they hold in the public eye, and the responsibility that comes with that. Karra credits her younger brother, who has special needs, for putting her on the scientific path. She says she spent her youth reading not just about healthcare and science, but how policies affect socioeconomic health inequalities. Photo by Ruby Wallau/Northeastern University

“We don’t realize how much credibility we have until we lose it, and I think that’s true for any person, regardless of whether they’re scientists or not, or what industry they’re in,” says Karra.

In a forthcoming book, titled Necessary Symbiosis: What Happens When Science and Government Work Together (and When They Don’t), Karra suggests that for the scientific community to regain the public’s trust—especially now, amid a global public health crisis—it is essential that scientists go beyond striving to meet publication and citation goals for their research papers. She says they must give greater consideration to how their findings could be interpreted by a lay audience, and how people’s understanding—or misunderstanding—of their work could affect how it spreads on social media, which is ripe for the spread of misinformation.

“I think once people and scientists realize that or start to work toward that, we can get back that credibility that we seem to have lost,” she says. Karra hopes that her forthcoming book sparks conversation both within the scientific community, and outside of it: among scientists and non-scientists, or scientists and policy makers. Photo courtesy of Vyshnavi Karra

Writing a book this year wasn’t exactly in the cards for Karra, who holds bachelor’s and master’s degrees in chemical engineering from Rutgers University. But when the pandemic struck, and unfounded claims about COVID-19 proliferated across the web, she was inspired to share her own research and experiences relating to science advocacy and public policy. Necessary Symbiosis, which is anticipated to hit bookshelves in December, explores the intersection of science and government, how that relationship has evolved over the years, and the consequences of that relationship. The book underscores how important it is for scientists to engage the public on issues such as the COVID-19 pandemic, climate change, and the anti-vaccine movement.

The spread of misinformation is a key topic. Karra delves into the U.S. federal government’s early response to the coronavirus outbreak, and how that has contributed to present-day challenges to containing the spread of the disease and reopening the country.

“As time went on, as scientists figured out, ‘we know a little bit more about COVID-19, and this is what it does, and this is how it spreads,’ it seemed like there were more and more deniers,” says Karra. “That’s when I pivoted from focusing just on science and policy to more on how scientists can be involved in writing the policy, but also advocating their work in a much better way.”

Karra admits she doesn’t quite know what that way is. The method by which each scientist communicates about research to the public may differ, she says, but it is more important than ever that scientists make their work accessible, and that they communicate in plain language that people who are not scientists can understand.

“People, I think, in general are more emotional than they are logical in a lot of ways,” she says. “So whenever we hear there’s a pandemic going on, our brains don’t immediately go to ‘What’s the epidemiology? How is it spreading?’ Our brains automatically go to, ‘Oh shoot, how is this going to affect me?’”

Karra credits her younger brother, who has special needs, for putting her on the scientific path. Growing up, she remembers a childhood filled with doctor’s visits, insurance headaches, and medical bills.

“I’m not resentful in any way, but it just taught me a lot about how convoluted the healthcare system is in the U.S.,” she says.

She says she spent her youth reading not just about healthcare and science, but how policies affect socioeconomic health inequalities. In her book, she discloses the impact of watching on television Hurricane Katrina ravage communities in and around New Orleans, and her thoughts on the government’s response to the disaster. She shares what it was like to experience Hurricane Sandy in 2012 when she lived in New Jersey. All of these experiences have shaped who she is, Karra says.

With Necessary Symbiosis, Karra hopes that the book sparks conversation both within the scientific community, and outside of it: among scientists and non-scientists, or scientists and policy makers. Her message to scientists is that, after the lab experiments, data collection and analysis, and scientific papers, they go a step further by anticipating how their work might be perceived and interpreted by the general public, and explaining any discrepancies and contradictions.

“Or going to policymakers and talking about how their research can help policy be better because of these anecdotal experiences that people have had,” says Karra. “It’s getting people to think and talk about advocacy as not being a taboo subject in science, but a secondary pillar to keeping science working as it should.”