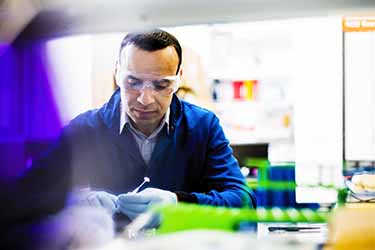 A $620K NSF CAREER award supports ChE Assistant Professor Bencherif research proposal on “Modulating Local Tumor Hypoxia using Cryogel Scaffolds to Regulate Dendritic Cell Function and Activity” for a five-year period from 2019 through 2024. The Faculty Early Career Development Program (CAREER) award from the National Science Foundation (NSF) is the foundation’s most prestigious honor for junior faculty members who exemplify the role of teacher-scholars through outstanding research, excellent education and the integration of education and research within the context of the mission of their organizations.

One of the reasons cancer is so hard to treat is that cancerous cells come from our own bodies. Our immune system has trouble distinguishing them from healthy cells.

“We can teach our immune system to attack cancer cells,” says Sidi Bencherif, an assistant professor of chemical engineering, but to do their job, immune cells need a steady supply of oxygen.

When cancer cells form tumors, their growth outpaces the available oxygen, creating hypoxic (low oxygen) areas. In a hypoxic environment, cancer cells can adapt their metabolism to survive, and even become more aggressive. But immune cells struggle to function.

“When immune cells come to the site to try to kill the tumor cells, they just can’t,” Bencherif says. “They are inhibited, because they are not used to being in a such immunosuppressive hypoxic environment.”

To study how low-oxygen environments alter the various functions of immune cells and ways to reverse it, Bencherif has designed a porous, gel-like material that gives off oxygen. He recently received a CAREER award from the National Science Foundation’s Faculty Early Career Development Program to support this work.

Bencherif did not originally build the gels to produce oxygen. He designed them as part of a cancer vaccine: microenvironments which would be loaded with cancer cells along active biomolecules and injected under the skin to act as training camps for immune cells. The porous gels would attract and activate dendritic cells (the information-gathering spies of the immune system), expose them to cancer cells so they knew what to target, and then send them back to the lymph nodes to share that knowledge with T-cells (the little soldiers in the body).

“It really is a lot like a training camp: recruit, train, activate and release,” Bencherif says. “And when we release dendritic cells, they will activate T-cells and mount a strong and specific immune response against cancer.”

But a gel filled with cancer cells acts a lot like a tumor—it creates a low-oxygen environment, which could make it harder for the dendritic cells do their jobs.

“Even if you are recruiting immune cells and trying to educate them, if you have a hypoxic environment, you’re not going to trigger a strong immune response,” Bencherif says. “You have to overcome hypoxia first.”

Now Bencherif has incorporated small particles that react with water into the matrix of the gels. This reaction produces a steady supply of oxygen. The oxygen-producing gels will allow him to study how an oxygen-rich environment affects the various functions of dendritic cells as they interact with hypoxic cancer cells.

“This is basic science. I’m trying to understand how these immune cells are affected by the tumor microenvironment and, if they are inhibited, how can we reverse it,” Bencherif says. “Down the road, this research may help us to make a better vaccine and potentially save millions of lives”.