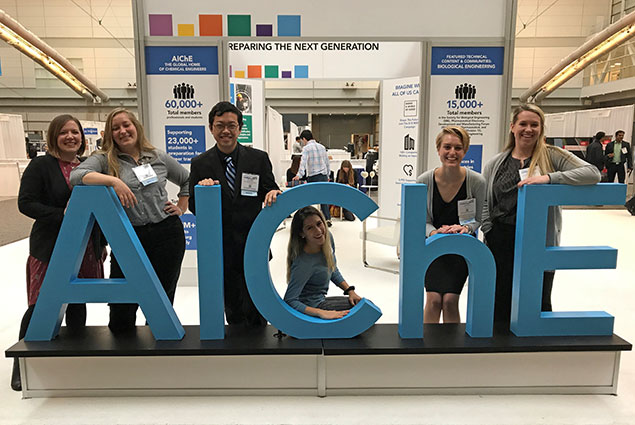 The American Institute of Chemical Engineers (AIChE), which was chartered all the way back in 1938, has been growing in the last few years under the tutelage of current student president Alexis Laundry. So much so that the chapter was named an Outstanding Student Chapter for the 2017–2018 school year and was awarded it at the 2018 AIChE Annual Meeting in fall 2018 in Pittsburgh.

The student branch, which is part of a much bigger international organization, focuses on connecting students with helpful university faculty and staff, potential employers, alumni and professional engineers and other students. AIChE accomplishes this by running several events throughout the year, including a joint career fair with the Biomedical Engineering Society (which features companies such as Bristol Myers Squibb, Lockheed Martin, and many others) which attracts over 150 people, alumni panels where former students come in and talk about their experiences professionally and how co-op helped them, weekly meetings and different periodical social events.

“One of the annual social events that we put on is the College of Engineering (COE) Jamboree, which is a social event,” said Laundry. “We try to get as many COE or STEM student groups as possible and we all get together for a day of games and fun community bonding. It goes beyond just chemical engineering students.”

AIChE also has a sub-group called ChemE Car, which competes in a national competition to build and operate a chemically powered vehicle.

For President Laundry, the club’s recent success has been due to a shift in the organization’s ideology and a change in its constitution, which was written about in an essay the group submitted for the Outstanding Student Chapter award.

“We wanted to improve relationships with departments here, the different colleges on campus and other student groups. We worked to make sure people knew the club existed,” said Laundry. “On other campuses, AIChE was more important. We wanted to make it an integral part here at Northeastern and we wanted members to keep coming back. We’ve focused heavily on freshman recruitment and retention.”

While the group is still heavily focused on professional development and co-op placement, it  became more interactive and involved for those who wanted to seek leadership roles. The club has 12 e-board positions, all unique in what each officer does. To run for election for one of the different positions, members are highly recommended to serve on committees, and are even required to for certain positions. Laundry credits the e-board and adviser, Professor Pfluger, for reasons why the club has achieved the heights it currently is at.

Laundry herself has found success both inside and outside of the club. Laundry, a Chemical Engineering major with a minor in Law and Public Policy, is in her second year as president of AIChE. She recently was awarded the 2017–2018 Donald F. & Mildred Topp Othmer Scholarship Award, which are presented to students on the basis of academic achievement and involvement in AIChE’s student chapter activities. But to her, the scholarship is just one part of what has overall been a rewarding dedication.

“It’s rewarding to see people on e-board grow and show passion,” said Laundry. “It’s also exciting to see a great number of younger students getting involved and sharing the same attitude. My co-op’s have lived up to my expectations to get experience, but it hasn’t been my defining experience at Northeastern. AIChE is. I want to make sure whoever takes over as president after me is as passionate as I am.”

Laundry and other members of the e-board will be presenting a workshop on how to run a career fair at AIChE’s aforementioned national conference.