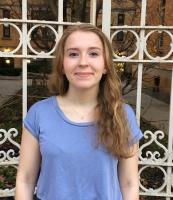 Elizabeth Fink is a second-year Chemical Engineering undergraduate student who was recently awarded the Undergraduate Advanced Research/Creative Endeavor Award for her research project entitled, “Designing an Advanced and Functional HA Cryogel for Investigating the role of CD44-HA Interactions in Breast Cancer Metastasis”. “Breast cancer is the most commonly diagnosed type of cancer in women. The high mortality rate of breast cancer patients is due to the aggressive metastasis that is characteristic of this disease. The goal of the proposed project is to develop an in vitro model to study the role of tumor microenvironment in breast cancer metastasis. Development of a reliable 3D cancer model for the metastasis of breast cancer would not only expand our understanding of the growth mechanisms of this cancer, but also in the development of more efficient and effective therapies.”

Last year, Elizabeth received the Undergraduate Early Research and Creative Endeavor Award for a research project entitled, “Developing a New Technique for the Formation of Uniform Multicellular Tumor Spheroids”. The Northeastern Office of the Provost grants this award to support compelling undergraduate projects executed under the mentorship of faculty. This project is being completed under the guidance and supervision of Professor Sidi A. Bencherif and the LAMP Biomaterials team. Elizabeth has strong interests in Chemical Engineering applications, especially in Biochemistry and Biotechnology, and is pursuing a Chemical Engineering and Biochemistry combined major as well as a Computer Science minor.

Although tremendous progress has been made in anticancer drug development during the past two decades, cancer medicine still faces unprecedented challenges associated with choosing effective treatments for individual patients. Thus, there is an urgent need to develop clinically-relevant and novel in vivo models and technologies to test and/or predict drug sensitivity and the likelihood of resistance. This has created a need to engineer more realistic culture models mimicking the native tumor microenvironment. Conventional two-dimensional (2D) cell cultures are not capable of recapitulating the complexity and heterogeneity of clinical tumors as in vivo tumors grow in a three-dimensional (3D) conformation. Liz’s work in the Bencherif Lab consists of developing 3D cell cultures as support for conventional 2D monolayer studies and before activating animal protocols.

Cancer cell spheroids, known as multicellular tumor spheroids (MCTS), are a type of 3D tumor models currently used in drug screening.  MCTS have been found to recapitulate the characteristics of native tumors, such as cell-cell and cell-matrix interactions between tumor cells and the microenvironment, as well as transport properties. Different methods of spheroid formation are available. Unfortunately, most of them require tedious and time-consuming procedures combined with a poor and inconsistent control over their physical features. Liz’s research explores a new way for creating these spheroids from a low number of cells in a quick and simple manner while having a good control over their size, morphology, and uniformity. Liz looks forward to expanding her knowledge and advancing her research in the Bencherif Lab to engineer more realistic 3D cell culture models to enable better precision in drug discovery.