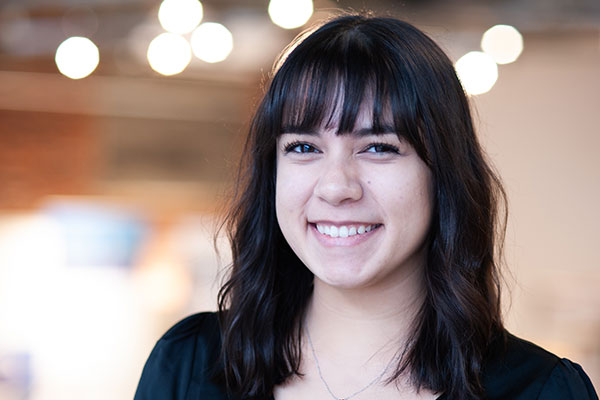 What do you get when you combine a knack for chemistry and math? A chemical engineering major, according to Samantha Roman, E’20.

“I was good at both of them,” she said with a laugh. Although chemical engineering in college is not just chemistry and math, Roman added. “But I chose it because I loved seeing how it could be applied in different industries, like biotech, food, and sustainability.”

Roman’s first co-op experience required a true leap into independence. She worked at SAPPI North America, a paper mill located just outside of Portland, Maine in Westbrook. As a process engineer, Roman learned about manufacturing and troubleshooting products based on customer feedback.

“Overall, it was a learning experience in building self-confidence to make decisions and work well with the people there,” she said. “I was insecure at the beginning. But a big takeaway was working with the people around you to build confidence. That was a huge accomplishment for me.”

From there, Roman worked at Davol Inc., a subsidiary of C. R. Bard, Inc. The Warwick, Rhode Island-based medical equipment manufacturer was an exciting co-op opportunity because it had a “people-driven impact.”

“I learned how to take initiative and advocate for myself with the work that I wanted to do,” Roman said. “It turned out to be a more mechanical [position] than I had initially thought. But I reached out to team members and built out some other projects that were more chemical engineering-related.

A mission to keep food fresh

When it was time for her third co-op, Roman knew that she wanted to make it count and find a company she truly aligned within all areas.

“I was looking for a mission-driven company where I could work toward a goal I closely believed in,” she said.

That’s how she found Mori, formerly known as Cambridge Crops. The technology company focuses on innovations in the food, agriculture, and packaging industries. Mori has a natural solution that is used to coat the outside of fresh produce to extend its shelf life, Roman explained. That helps reduce food waste by lengthening food shelf life and can help in food transportation.

There were two people at the company when Roman first applied for the co-op, and five total when she started. With a myriad of responsibilities—working in the lab, food studies, and general administrative ones—Roman said it was a true learning experience. But, one that she loved.

“I continued to work part-time through the fall and spring [after my co-op ended],” she said. “I couldn’t step away from the company. I was so ingrained in the work we were doing, and with the team. I wanted to keep myself involved, even if it was part-time.”

But Mori didn’t want to lose her either and brought Roman on full-time as an associate engineer after she graduated. Roman said her role now involves process, development, optimization, and working to scale up the company’s main product. Chemical engineering is now definitely at the center of what she does on a daily basis.

“This type of work, and the work environment, has been unlike any other co-op experience,” she said. “Even as a co-op, I was given ownership over everything I was doing.

“I find myself looking back on things I learned in class [at NU] to help with the work I’m doing now,” Roman said. “It all feels very closely aligned with the ‘impact factor.’ As a chemical engineer, there is lots of responsibility to meet manufacturing needs, and think about the larger scale of how our product can be implementable.”