Festival of Genomics highlights research from the Slavov Laboratory 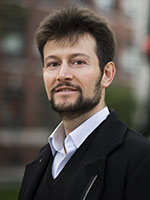 Festival of Genomics interviewed BioE Assistant Professor Nikolai Slavov to find out about the origins and the future of a new method for quantifying thousands of proteins in single human cancer and stem cells that his laboratory developed:

What are you working on right now?

In terms of technology development, we are evolving our approach to Single Cell ProtEomics by Mass Spectrometry (SCoPE-MS) to significantly enhance the throughput and the accuracy of quantifying thousands of proteins in single mammalian cells. We are also building upon and extending our ideas to enable quantifying post-translational modifications in single cells. These new types of data have motivated us to think about the conceptual framework within which we can understand them and apply them to exciting biological problems, such as understanding signalling heterogeneity during directed cell differentiation and cancer metastasises. My laboratory is also actively working on understanding how ribosome modifications contribute to regulating protein synthesis (Slavov et al., 2015). I am very excited by all of these projects, especially by thinking of new ways for understanding single-cell proteomics data and new principles behind ribosome-mediated translational regulation.

What’s the biggest challenge your research field faces at the moment?

The biggest challenge is coming up with a creative conceptual idea. This is well illustrated with the development of Single Cell ProtEomics by Mass Spectrometry (SCoPE-MS). SCoPE-MS could have been developed seven years ago if a PI had the idea for it; in fact, we developed SCoPE-MS using only technology that was already present in 2010, and awaited the idea that would enable single-cell proteomics by mass-spectrometry. Now that the idea had been demonstrated, the major mass-spectrometry labs around the world are actively building upon it, using the latest technologies. What was rate limiting was the idea – not the technology.

I think that the promising ideas that can enable both new technologies and conceptual breakthroughs outnumber the people who think creatively enough to realize them. In my research area, this is due in part because relatively few biologists understand mass-spectrometry deeply enough to apply it in creative ways to exciting biological problems. More broadly, the development of new ideas is hampered by an excessive emphasis on data generation. The community and the granting agencies reward tangible results, which are mostly easily and speedily produced by applying new cutting-edge technologies to generate large datasets rather than by developing and demonstrating new concepts. I think the progress of biomedical research will be much accelerated if we find a way to reward more conceptual advances and ideas and deemphasize mere data generation.

Read the full interview at:

What was rate limiting was the idea – not the technology.